Note: To get this project to work you’ll need a Twitter account. And you’ll need to set up a device (feed) at xively.com and a ‘zap’ at zapier.com as directed in this post. It explains how to send tweets using triggers.

Also, you may notice delays due to the number of steps involved.

[aka.shell] download from here: http://www.iamas.ac.jp/~aka/max/ – and add the path to the folder to Options | File Preferences in Max

You can use curl for http: requests in Max by formatting the command line with [sprintf] and running it in [aka.shell]. There are a few idiosyncrasies – for example with escape sequences.

In tweetCurl5a.maxpat, the curl command is built in two sections:

Here is the part of the patch which formats request data:

You’ll notice a lot of backslashes used in [sprintf]. This is done to preserve quotes. Normally a quote in [sprintf] indicates a string. Use 3 backslashes to escape a quote:

The [sprintf] code is obtuse because we are formatting JSON data. The resulting data looks like this:

Note that you can pass arguments into [sprintf] using %s – but if you are using a [textedit] to collect data from the user, you’ll need to use [tosymbol] to consolidate the text into a single symbol before passing into [sprintf]

Here’s the code which writes the formatted JSON data to a file: 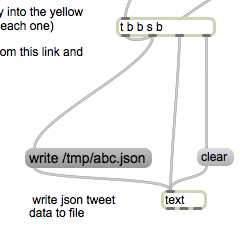 The next step is to format the curl command, which will read the JSON data file and send an http: request to cosm.com. Here you can see the [sprintf] for this command.

At the very end of the [sprintf] you will see

This is the linux method to redirect error messages and standard output from [aka.shell] to the same place, which in this case will be the Max window.

By the way, here is what the curl command will look like on the command line

Note: The actual ApiKey above has been replaced with: abcdefg1234567 – so that you don’t accidentally send embarrassing Tweets from my account.