Note: The Osc addon is already provided with openframeworks distribution. At this point you have everything you need to run the test example.

See this post on the Pd site by Julian Brooks: 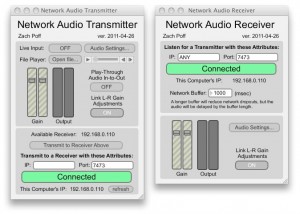 Note: tested 12/2015 – from mac os el-cap working across LAN but flakey. Make sure Sample rates are matching. Latency is adjustable using buffer size in app. Your results may vary.

By Zack Settel and Cort Lippe